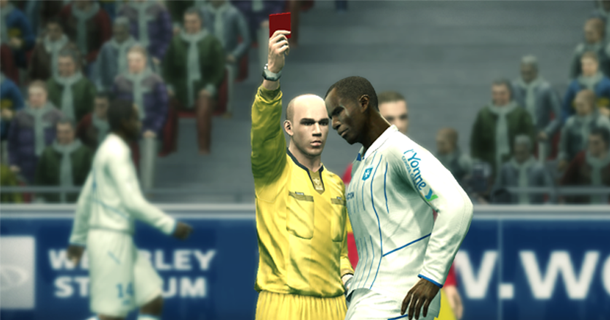 You received a red card in an important PES match! One of your players is sent off. You are now at a numerical disadvantage. Things are looking bad. What do you do?

Fret not, as this short PES guide will aid you to survive the match, and even help you achieve a seemingly impossible victory!

Well I learned this the hard way when I conceded a rather ridiculous red card.

My LB was sent off, and my formation became like this.

And what is the one thing to do in PES when you received a red card?

I was too lazy to change my formation when my player was sent off. The match was 0-0 at the time of the sending off, and I lost 2-0 at the end. Coincidentally both goals came from my left wing. Their wingers took advantage of the empty space to put in crosses that led to the goals.

And here are the 3 simple steps to alter your formation, to have you continue your normal game plan.

Keep the same number of defenders

If your defender received a sending off, which is often the case, sacrifice a midfielder or an attacker for a defender to come in. We have to keep our defence intact and prevent conceding goals, before we can even think of getting a decent result out of the match. Ensure the opponent’s dangermen are still closely marked.

Keep at least 2 forwards if you are fighting for goals.

If you are leading at the time of the sending off, keeping 1 striker upfront is fine. However when you need goals, go for 2 forwards.

When your defence are fully covered and you have enough firepower upfront, the sending off will become insignificant and you will find yourself able to play your normal game. With your opponent attacking rampantly to take advantage of the extra man, playing a counter attacking game is your best strategy to get a goal against the run of play. And once you score, take advantage of the momentum to score another!

With these 3 simple tactical guide, sending offs will no longer be an issue to you.