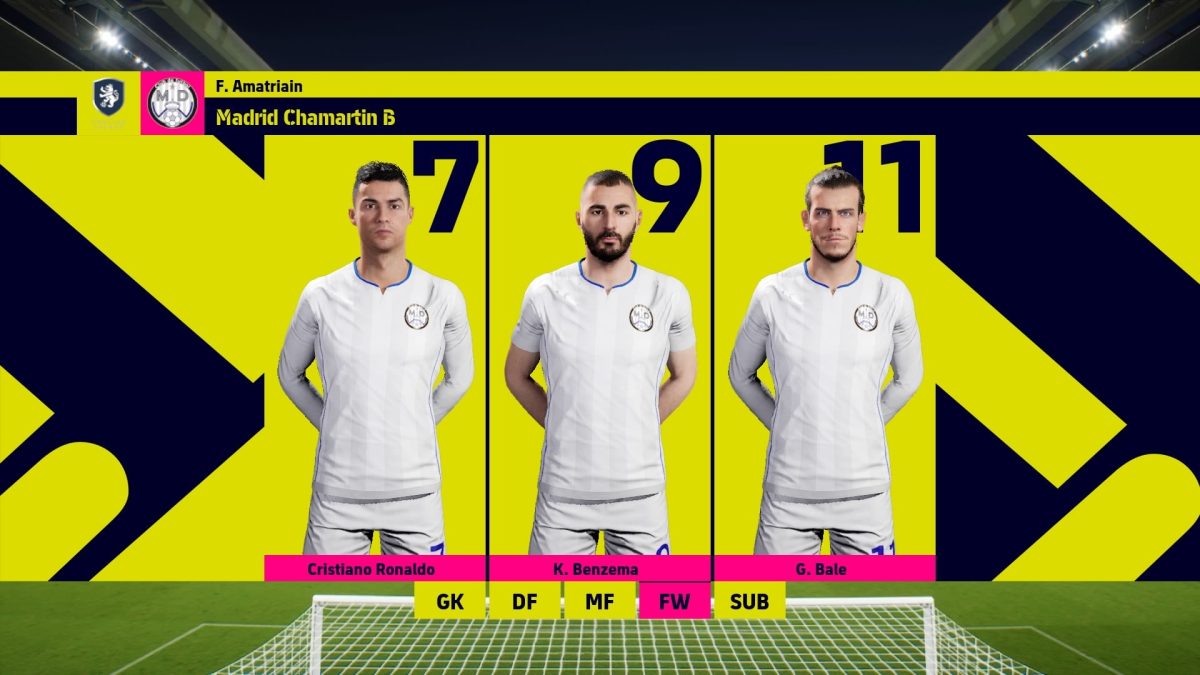 Who can ever forget the great BBC combination of Los Blancos?

Whether you are a Real Madrid fan or not, you would undoubtedly be impressed by their achievements.

Flushed with the GPs given by Konami for the World Cup events, I decided to bring the 3 of them back together. Then I thought, why stop there, why not bring all the prominent ex-Madrid players back?

So the mission begins.

Note that this team is not exclusively ex-Madrid players. It is a past and present squad, since Benzema, a current Madrid player, has to feature in the BBC. I also have Luka Modric from one of the free spins, and he is great, so he stays in the team as well.

Aside from these 2, everyone else will be an ex-Madrid player.

The Real Madrid Past and Present Squad

Here is the team.

It was a joy to build this team. Finding out where these guys are playing now is tough, but it was an enjoyable journey. It is interesting to follow their career paths.

I didn’t manage to get any Real Madrid legends, so I literally had to start from scratch, minus the players that I already had from building other squads or were given to me for free by the game, which was just 2-3.

This squad is also really expensive to build, I guess just like in real life.

Ronaldo costs close to 500k. Casemiro 300k. Benzema is the most expensive at over 700k. But it was worth it. I had to grind through alot of events to sign all these players. I was left with less than 100k after signing these 18 players. But oh well, what is the use of GPs if you do not use them.

As usual, I will share my thoughts of these players below.

Diego Lopez (GK) – I was surprised to see him still playing in real life. He is tall and has great reach, so I knew I had to get him.

Adan (GK) – He got a fair amount of appearances for Real Madrid. Unfortunately he is playing back up goalie again for my team but that is because I chose to level up Diego Lopez more.

Marcelo (LB) – The legendary left back. Crosses well and has rising shots. Train him up in offensive awareness, speed, acceleration, stamina, and you have him back at his prime. I just love his Fullback Finisher playstyle that takes him all the way into the opponent’s penalty box.

A. Hakimi (RB) – He wasn’t playing much for Madrid, but, as he is also a Fullback Finisher, having him on my team will help terrorise my opponent’s defence. I guess having two fullback finishers leave me stranded at the back, but I know I can rely on my center backs and defensive midfielders.

Danilo (RB) – I needed a fullback who can cover both flanks on the bench, and Danilo is the man. His offensive fullback playstyle means that my team doesn’t play defensive on the flanks.

Pepe (CB) – He fits the Destroyer playstyle so well. Everyone needs him in the team to strike fear into the opponent. He is also a threat during attacking corner kicks.

Sergio Ramos (CB) – Well well. He has scored so many late winners in real life and I aim to replicate that. Being an Extra Frontman, you can easily send him up by going Super Offensive in the late stages of the game.

R. Varane (CB) – Strong and reliable. His Build Up playstyle offers something different from my other 2 center backs.

Casemiro (DMF) – I tried playing a few matches without signing him (since he is quite expensive), but it was really tough. There is no steel in the middle of the park. I gave up, signed him, and he transformed the game as you would imagine.

L Modric (CMF) – A joy to play with. He passes so well. He makes you feel like a great PES/eFootball player. His stamina runs out fast so you might need to sub him out often.

Illaramendi (CMF) – An interest DMF Orchestrator to have in your team. He comes on for Modric in the second half for me. On good form, he starts as well. Not that good defensively but that is why you have Casemiro to cover him.

Ozil (AMF) – Perfect classic number 10 for my Real Madrid and Arsenal squad. I invested all his training points on passing and dribbling, so all he does is control the ball, evade tackles, and send killer through passes and crosses. And that is enough. Being a Classic Number 10, he doesn’t move much around the field, not that he needs to. I put Counter Attack on him to conserve his low stamina. All of these combined means that he pretty much stays in the AMF spot for almost the entire game to receive passes and send passes. He is awesome. His celebration is great too.

J. Rodriguez (AMF) – Another fun classic number 10 to play with. He is versatile and can cover AMF, WF, and CMF if you really need to.

Cristiano Ronaldo (LWF) – This is a tricky issue. Ronaldo in this game is more suited as a CF goal poacher. He has lost his speed, and his main strengths are his amazing finishing skills. For some reason, even his set piece rating has dropped. But playing in CF is not the reason I bought him. Ronaldo in BBC do not play in CF. I invested all of your points on dribbling, speed, and acceleration, to recreated his LWF days. It is not quite there yet, and he doesn’t have that many levels to level up, but well I did the best I could. Without the Prolific Winger playstyle, he doesn’t really behave like his BBC days, unfortunately. Still, it is nice to see him on the left wing. Dribble with him wisely from the left flank, and you can still manage to beat defenders to send in crosses, or take a powerful shot towards the far post. In addition, if you use Ronaldo to combine well with the marauding Marcelo, you can use Marcelo to take the ball down the left flank, and Ronaldo to venture into the box to meet Marcelo’s crosses with powerful headers. Talk about realism 🙂

Gareth Bale (RWF) – I do not see many online players using him. I would say everyone is missing out. Do you know that he has ability to execute all 3 stunning shots? Dipping shot. Knuckle shot. Rising shot. No matter how much you charge up your stunning shot, Bale will deliver something. He is really fun to play with. He also has pinpoint crossing so he can do his regular winger thing as well. Just note that you should avoid cutting in with him too often. That is what opponents expect with Bale. Keep your opponents guessing. And again back to combining with Ronaldo. Power up your crosses a little more to aim for the head of Ronaldo and let CR7 utilise his high heading and jumping ratings.

A. Di Maria (RWF) – He has a creative playmaker playstyle which offers something different to the squad. I use him either at RWF or AMF, depending on the form arrows and fatigue level of Ozil and Bale. He is one of the classic Rabona player on PES so using him will allow you to spring up some magic.

Benzema (CF) – The most expensive player in the team, and probably worth every GP. He is extremely mobile, fast, shoots well, heads well, and as a Deep Lying Forward, he drops back to receive the ball and provide link up play during your attacks. Has dipping shot, chip shot control, and first time shot to threaten the goalkeeper in every situation.

G. Higuain (CF) – Got him for old times sake. He has a Fox in the Box playstyle, and to be honest, I am not really sure how that works. I am not saying that this playstyle is not good (in fact it serves its purpose), but I am just not used to it. To me, Fox in the Box means the striker is fast to react to loose balls in the box and can finish well, and Higuain achieves this for me. It will be hard for Higuain to displace Benzema, since BBC is the reason why I created this time, but I might level him up a little more to enjoy using him.

L. Zidane (GK) – Yes, he is one of Zidane’s son. Got to have the Zidane name in my classic Real Madrid squad. Unfortunately his brothers are currently no in the game. I rotate him with Adan at times. I would also like to say that he earned his position in the team. After levelling up, he has good stats, and his offensive goalkeeper playstyle complements Diego Lopez’s defensive goalkeeper playstyle.

T Kubo (RMF) – I signed him for my Japan team, and he basically plays like Messi, especially when he is on top form. I decided to leave him out of this squad since he is a starter in my Japan team, which I use regularly.

Seeing BBC up front brings a smile to my face in every match, and probably multiple times in a match too. The way these players combine to build attacks, each offering something different, is just amazing. It brings back fond memories of good old days.

Please do create your own themed squads, and I look forward to matching up with you!