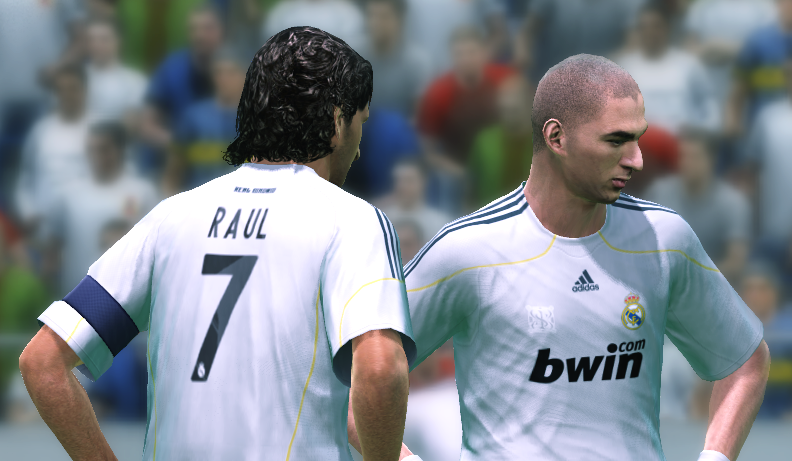 Real Madrid is one of the best teams in the world. Almost every player dream of playing for them. I have used Real Madrid a number of times in PES. In this tutorial, I will share my guide on the team for PES 2010.

Strengths of Real Madrid in PES

Kaka and Ronaldo have space to dribble and wreak havoc.

With a short run up, Ronaldo’s shot will be low, powerful, and homing for the corner of goal. Xabi Alonso is a great passer of the ball, and a great long range shooter as well. M. Diarra is strong to win tackles and headers.

Van Nistelrooy is a brillant sharpshooter and header of the ball, while Raul has great shooting technique. Both of this two veterans are very responsive to loose balls in the box, so keep them high up the pitch.

Benzema is a good all rounder striker with pace and great shooting techniques.

The Real Madrid second team is talented and can be counted on.

Van der Vaart can replace Alonso.  Guti can be brought on for Raul, and Benzema may be substituted with Higuain, who has great potential to be a superstar in the game.

Lastly, buy a new reserve goal-keeper. Try not to use Dudek as he makes ridiculous blunders in the game.

In my first season, the captaincy is between Raul and Guti. As this two older players age and their abilities fall, I had made Xabi Alonso my captain since he starts most of the games.

Real Madrid has attacking sidebacks, and is prone to fast counter attacks. They has a weak left defence when they play Drenthe and Marcelo. Thus if you are facing Real Madrid, attack their left defence! Remember to man-mark Ronaldo. And if their goal-keeper is Dudek, keep trying long shots!