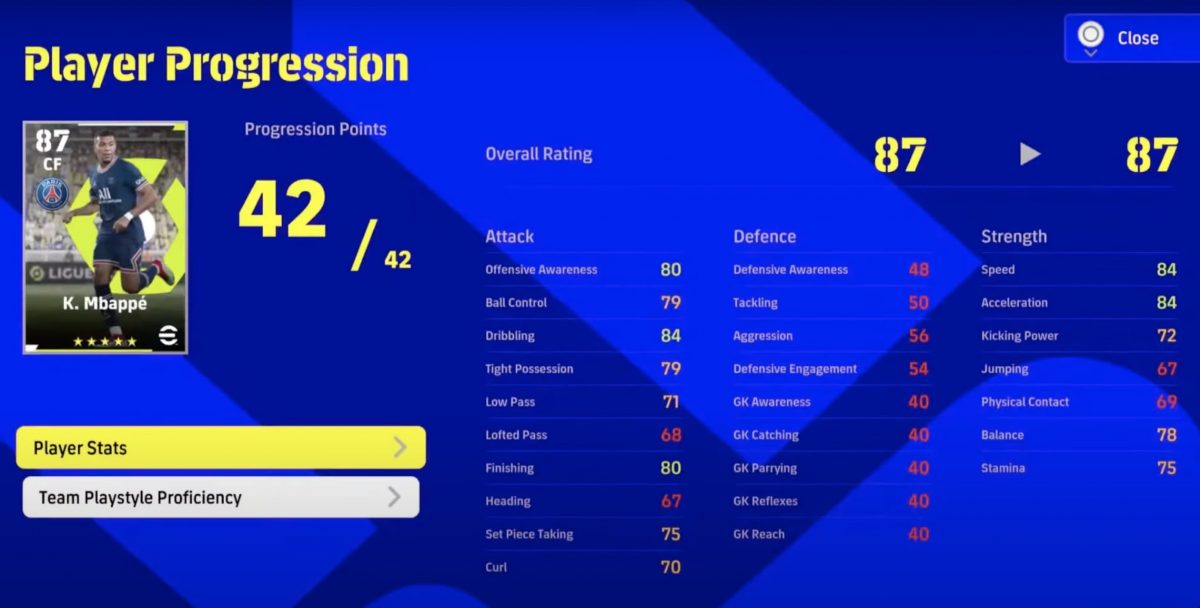 One of the good things about eFootball is the ability to level up your players.

Most players field highly rated players such as Haaland and Mbappe. It is fun to control the world’s superstars, but it may get boring after a few games.

Since players can level up and reach high ratings of 80s and 90s, why not sign your favourite players, regardless of their current rating, and enjoy the game?

Revive ageing superstars, build past and present squads, sign unknowns and train them up. The possibilities are endless.

In this post, we will talk about levelling players in eFootball

There are different types of player cards. Most can be levelled up but not all. Lets talk about each of them.

Legendary players who have retired from the game

Able to Level up: Yes

Players selected based on strong performance in a particular match

Players who have put in a strong performance recently

Able Level up: No

To summarise, all player cards can be levelled up with the exception of Featured. If you plan to play with players who will get better over time, skip Featured Players.

The number of experience points your players earn will increase if they fits in with your manager’s coaching affinity.

Each manager will have an affinity towards a certain group of players e.g Young players (below 30 years old), Forward Players etc.

These players will receive a boost in the number of experience points earned.

Hire the right manager based on the players you wish to develop faster in your team.

eFootball follows the usual RPG concept where the amount of experience points required to progress to the next level progress exponentially. You will find it easy to level up at the initial stages, and it turns into a slog towards the last few levels.

Different players have different maximum level. Legends typically have less room for growth, at ~10 levels, as compared to other types of players which can go up to 30 or 40.

Each increase in level gives you 2 progression points, which can be used to increase the rating of certain abilities.

Go to ‘My Team’, select a player, ‘Player Progression’ to apply the points.

You can use the points on ‘Player Stats’ or ‘Team Play Style Proficiency’.

Player stats are categorised, with examples being ‘Shooting’, ‘Passing’, ‘Defending’. Choose the category you would like to improve on. For example, if you were to choose ‘Shooting’, you will improve the rating of ‘Finishing’, ‘Set Pieces’, and ‘Curl’.

Choose the category based on your player’s position, and the type of player you want him to become. You can have the game suggest for you, but I prefer to decide on my own.

The categories and associated stats are quite self-explanatory. For strikers, go with ‘Shooting’. For wingers, prioritise ‘Passing’ and ‘Dribbling’. For centre backs, start with ‘Defending’.

The flexibility of this system means your upgraded superstar will be slightly different from your opponent. Perhaps you emphasise heading skills for your centre forward, while your opponent prefers speed. This makes for more interesting matches.

As you allocate more points to a category, the number of progression points required increases.

For example, at the start, you use 1 progression point to increase ‘Shooting’ from 0 to 1. This increases ‘Finishing’, ‘Set Pieces’, and ‘Curl’ by 1 point.

When ‘Shooting’ reaches a higher number e.g 5, you will need 2 progression points to change it from 5 to 6. The associated stats will also increase by 1 point.

It will be easier to build a well-balanced player who grows in all areas, as compared to someone who is very strong in one area.

A high play style rating helps your team play better. Passes will be more accurate, players will be easier to control. Each player’s play style proficiency contributes to the overall team play style.

Allocate your progression points to increase the player’s proficiency in the play style you will be using.

Each progression point will lead to a 10 point increase in play style proficiency.

Thus, it is important to sign players who already have a reasonably high proficiency (>50) in your preferred play style.

I find that play style proficiency is more important that Player Stats at the start of your game. Aim to maximise proficiency in your preferred play style before spending progression points on player stats.

If you like to switch between 2 play styles in the game, you may want to increase the player’s proficiency in both play styles.

As you play the game and complete objectives, you will receive level trainings. These award you with experience points (100, 1000, 4000, 10000) to accelerate the levelling of your players.

Go to ‘My Team’, select a player, ‘Level Training’ to apply the experience points.

Once your player levels up, you will receive progression points to spend on ‘Player Stats or ‘Team Play Style Proficiency’, as covered in the previous section.

Save these points and use them on your favourite players to level them up fast.

Note that every player you sign comes with a 365 days (real time) contract. After a year, you will not be able to field the player, unless you renew his contract using some form of virtual currency.

Consider how you would want to use your Level Trainings. There may not be a point in levelling up a player whose contract will expire in a few weeks and which you do not plan to renew.

I enjoy the concept of player levelling in eFootball. It gives a sense of progression and allows you to revive your favourite veteran players to their glory days. I hope this guide gives you a good overview of how to level up players in eFootball.