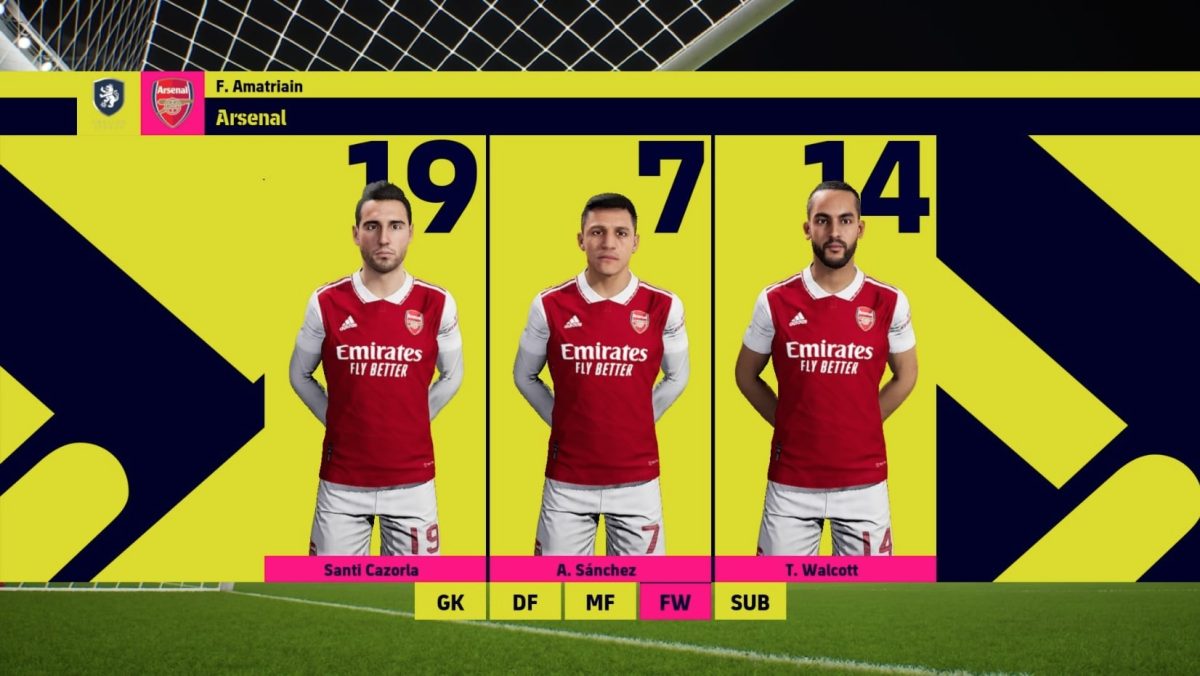 Two of the best thing about eFootball, in my opinion, are

The first thing I did in the game was to create an Arsenal past and present squad.

Well, some of my favourite players have retried. However, there are many still playing and that allows me to build up a really fun squad. A fair bit of googling ‘Arsenal players still playing’ helps.

Most of the players have excellent passing skills and more importantly, one touch pass. This allows me to recreate Arsenal’s free-flowing passing game.

Here is my review of the team.

E. Martinez (GK) – Well, he is now the first choice GK for Argentina so that justifies his place in the team. He wasn’t playing much during his time at Arsenal so I thought it would be fun to see him more often in an Arsenal shirt. He is tall and has good reach.

t. Fabianski (GK) – My second goal keeper. Whoever is in the better condition will play.

G. Clichy (LB) – Speedy left back during his prime. Obviously has lost his speed but made it up with his Unwavering form which meant I do not think a LB cover. Is a threat going forward. Has pinpoint crossing and rising shots abilities which are bonuses.

Hector Bellerin (RB) – One of my favourite right backs in the game. Gutted that he has left Arsenal. I allocated most of his points to speed, acceleration, and offensive awareness, and uses him to go up front all the time. Has dipping shot ability which allows me to try shots from loose balls after corner kicks.

Gabriel Paulista (CB) – I love his destroyer play style. A no-nonsense defender for me. Scores headers from corner kicks as well.

David Luiz (CB) – Good passer from the back. Has knuckle shot ability which makes it fun to shoot with him. His Extra Frontman play style may get you some crucial goals. A really fun player to play with.

S. Mustafi (CB) – A reliable CB. His Build Up play style fits Arsenal, but I will hesitate fielding him ahead of Gabriel Paulista as I feel that you need at least one ‘Destroyer’ in your backline.

J. Inamoto (DMF) – A really good purchase. Makes great interceptions to help me launch counter attack. Being a legend, he is always on good form. He also has great stamina. He has made the DMF slot his own.

P. Vieira (CMF) – The veteran legend odds were in my favour. Most players put him in DMF position, which cancels out his box-to-box play style and that is a waste. With Inamoto in DMF, I can put him in CMF and unleash this ‘cheat code’ all over the field. You probably already know how good he is so I shall not say much more.

Cesc Fabregas (CMF) – One of the legendary Arsenal midfielders who left in his prime. Glad to have him back. No one expects him to have Marseille Turn, which allows me to spring some surprises. Obviously has great passing skills.

M. Ozil (AMF) – Guile. Skill. Class. Allocate all your training points into Passing and Dribbling, and use his to split your opponents’ defence. Put Counter Attack on him to conserve his low stamina. Has inconsistent form so you may need a backup, but that also give you many occasions to enjoy him when he is on tip top form.

S. Cazorla (LWF/AMF) – A playmaking wizard. He may not have speed, but remains a great dribbler due to his high ratings in ball control. I play him in AMF when Ozil is in poor form. He also does well on LWF, cutting him to curl towards the far post.

Willian (LWF) – Recently back in the game, he is the key dribbler in my team. I allocated his training points to dribbling, speed, and acceleration, and he has done wonders for me. Plays well on both flanks. Has pinpoint crossing ability to send in accurate crosses despite not having high ratings in passing.

T. Walcott (RWF) – He was well-known for speed but that is no longer the case in the game. That said, I enjoy using him as his Dipping Shot and First Time Shot abilities are helpful to convert chances in the penalty box.

C. Vela (RWF) – Played much better after leaving Arsenal. I got him in as I wanted a left-footed RWF to cut in. Does well in that regard.

A. Sanchez (CF) – One of the best strikers during his time at Arsenal. He is now back tearing up defences. His Deep Lying Forward play style is a good fit to the possession passing employed by Arsenal. Has good balance, runs hards, passes well, and hits good curlers towards the far post.

O. Giroud (CF) – Now still playing at the top level. He offers an entirely difference approach to Alexis Sanchez. He is a great header of the ball and has high kicking power to hit those rising shots. With super sub ability, he is the perfect second half substitute.

Review of other ex-Arsenal players

I have also tried a few other ex-Arsenal players who are not in the above first 18. They are not in the screenshot now because of their skills, but because I like to rotate players.

Wojciech Szczęsny (GK) – Probably the best ex-Arsenal goalkeeper still in the game. I initially signed him as my first choice but decided to add some variety to my squad.

Kieran Gibbs (LB) – Initially signed him as a second LB, but as Clichy rare gets out of form, there is no need to Gibbs to take up a slot on the bench.

Ainsley Maitland-Niles (CMF) – A good utility player who can play in multiple positions.

Alex Oxlade-Chamberlain (CMF) – Initially signed him to cover for Walcott at RWF, but felt that he is better in other positions. Another utility player. He also has Scotch Move which is fun to pull off against defenders.

Jack Wilshere (CMF) – One of my favourite players. Unfortunately we can’t buy him in the game anymore. Has an orchestrator play style with double touch ability. A joy to play with. I can only go back to past PES versions to play as him now. Sigh.

Ryo Miyachi (LWF) – Again, another player who did not feature much, but I enjoy bringing in players who are not rated too high in the game and training them up. He is a speedy player so is perfect as a second half substitute to sprint past tired full back.

Danny Welbeck (CF) – A good goal poacher, offering something different to all my strikers. Is a super-sub as well so that’s nice.

Park Chu Young (CF) – Didn’t play much for Arsenal but decided to bring him in for nostalgia. Has Deep Lying Forward play style like Alexis Sanchez so that help him fit into my team. Plays surprising well for his rating.

Pierre-Emerick Aubameyang (CF) – Fast. Good finisher. An awesome Goal Poacher. While he is good, I preferred my other forwards since he just left not too longer ago and I have seen him in an Arsenal shirt enough times over the past two years. Perhaps he will make it back into my squad in a year or so 🙂

Building great teams of the past is always a fun thing to do in eFootball. You get to recreate what you have seen in matches during previous years. It brings back a nice wave of nostalgia. Note that if most of your players are above 30, their stamina ratings will be pretty low, which will likely affect your performance in the second half. Either put Counter Attack on two of these guys, or invest some training points to their stamina. I hope you will have as much fun building such teams as I did.