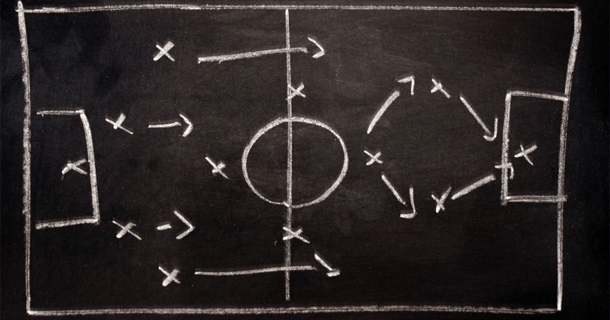 How are you applying these PES sliders into your game play? In this post, lets go through quickly the effects of each slider options and discuss how we can use them effectively into our game.

At 100, players will move forward of the ball carrier to provide options. However, take note not to crowd the box as it will makes it more difficult to find spaces.

At 0, players will move behind ball carrier to cover the space.

At 50, players will stay around ball carrier to provide support

At 100, player will keep a far distance from ball carrier to play a long passing game.

At 0, players will stay close to ball carrier to play quick short passes.

At 50, players keep a fair distance.

At 100, players have the freedom to interchange positions with anyone. This is very good as it draws markers out of position.

At 50, players only change positions with similar players.

At 0, players are disciplined and never change positions. Yawn.

At 100, players squeeze in the middle and focus on attack through the centre.

At 0, players spread out wide to attack down the flanks and play in crosses.

At 50, players keep a fair distance from ball carrier.

At 100, players hunt down opponent ball carriers like wild dogs to get the ball. Too much pressing may leave you exposed at the back and leave players unmarked.

At 0, players are relaxed and only approach opponents if they come close enough.

At 50, players do normal pressing.

At 100, defensive back line is pushed up high. You can use this together with the offside trap.

At 0, you play with a deep back line.

At 100, wide players will close in and surround the opponent ball carrier from all directions.

At 0, wide players stay a far distance from opponent ball carrier, to prepare for a counter attack.

At 50, players stay a fair distance from ball carrier.

At 0, you play with a flat back line.

At 1, you play with a sweeper.

You can take your time to tweak around with these options to find the perfect recipe for your team. That will be useful when you are playing Master League and has a team full of players you purchased.

However, if you are playing a team either in exhibition, multiplayer, or even the first few matches of PES Master League, my advice will be not to bother too much with these options. The settings are already optimized based on your team’s strength. You can choose one or two areas to refine, that should be sufficient.

High settings on a number of slider options will increase the fatigue of your players, so we have to tweak our settings with care. As much as we love to play attractive football, we cannot be too adventurous when we use weaker teams as doing so will leave our players too tired to perform.

The 2 sliders I tend to adjust to high settings are ‘Position Switch’, and ‘Pressing’.

Position Switch is especially useful to create unpredictable attacking play as players switch position among themselves. I tend it set it to high. In previous versions of PES, there is a team strategy called ‘Switch Sides’, where the LEFT and RIGHT flanks will switch sides. This option has been replaced with Position Switch, and I recommend for you to give this option a high priority as I feel you will enjoy the game more with this setting.

In addition, I enjoy playing a pressing game. Constant pressing will put pressure on my PES opponents, leaving them less time to plan their moves, and forcing more mistakes. Once I win the ball, I can set up my swift counter attacking play.

I tend not to make major changes to the settings. If required, I will recommend you increase the settings of Position Switch and Pressing. However, high settings for many of the options will lead to increased fatigue. Thus we have to strike a balance between the kind of style we want to play, and the abilities of our players.