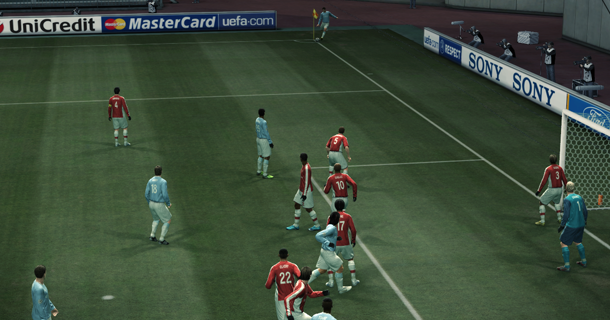 We have discussed about scoring with free kicks, making our corner kicks count, and defending against free kicks. And now in the set pieces series, we shall find out how we can effectively defend against corner kicks.

Corner kicks are totally unpredictable. There is no sure way for anyone to score from corners, though I have shared a few useful strategies. The players positioning are totally random in every corner. That said, I still follow 2 simple rules that has allowed me to successfully defend against corner kicks on many occasions. Yes it is already not easy to score from a corner kick, and we can make it even harder for our opponents by clearing every ball they send it.

Ensure a player is between each opponent and the goal.

This will allow all your opponents to be closely marked. In the initial positioning during a corner kick, most opponents will have a marker close to him. However, players in the box will start making runs, so select your nearest player to stand close to any free opponent, positioning yourself between him and goal. This positioning lets you challenge any high ball and clear them upfield easily.

Select another player to stand at the near post.

There might not be enough time for you to apply these 2 techniques if your opponent takes a quick corner kick. So the marking of players take priority. If your opponent are the sort of players who takes their time to aim and pick out a teammate, then you will have time to guard the near post.

Go for the counter attack

Most of your opponents are already in your box. Play a few quick short passes and move your way up the field quickly to counter attack!