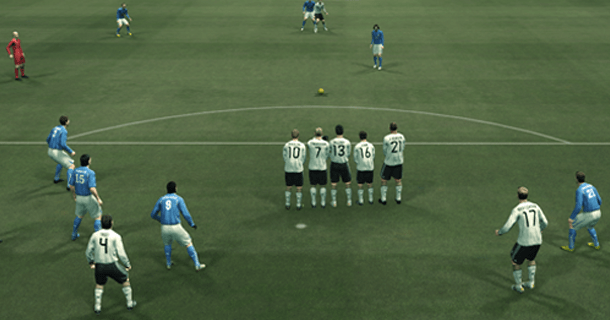 In one of my previous posts, I have wrote about how to score from free kicks in every position in PES. And, after much practise, you are able to score with free kicks. But so do many other players out there!

How do you stop them? One way is to prevent conceding free kicks. That is easier said than done, with the amount of absurd refereeing in PES. The other way is to know what to do when defending a free kick. This is much more easier and manageable, and I will show you just 2 simple steps in this concise post to defend the free kick.

When defending free kicks in PES, you can choose to increase the number of players in the wall by press L2 + Up, or decrease with L2 + Down. Personally I do not bother about this part. My recommended wall defence will be to ‘Rush Forward + Jump’. This has proven to be the most effective method of blocking the curling ball. Yes this method cant stop grounder shots, but seldom do PES gamers play grounder shots. And grounder shots are not really powerful. Your keeper can handle that with ease.

Watch how this trick works in this video.

I am not sure about you, but when I am taking direct free kicks in PES, I tend to aim for the near post. It is much easier to score as the keeper is guarding the far post. And I believe majority of PES gamers out there use this strategy as well. So before your opponent takes the kick, select one player and make him run towards the near post and stand there. When the kick is taken, keep pressing the ‘Shoot’ button. If the ball indeed come towards the near post, your player will be there to head the ball to safety! But I just like to point this possibility out to you.

One point to note, when you are using the 2nd technique, watch out for indirect free kicks, since your opponents will no longer be offside with your defender at the goal line. However, PES gamers very rarely use indirect free kicks when they are near to goal, as it is much easier to shoot than aim for a pass.

With these 2 simple steps to defend PES free kicks, you will be able to reduce your goals conceded in a match.