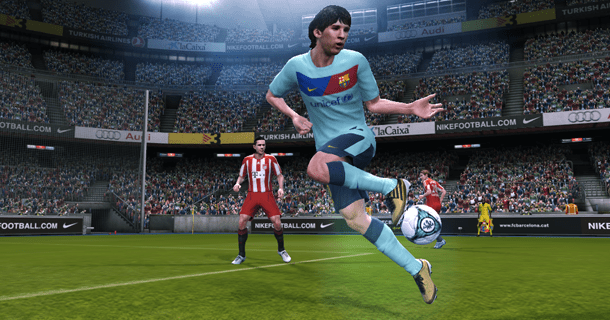 These are generally unchanged in PES 2011. However, players are able to take shots from more angles and in tight situations. Improved animations and player intelligence allows players to make more snap shots and volleys, whereas in the past they will just ignore your commands.

Are you asking about penalties? Well, I have not been awarded one yet so far, in the PES 2011 demo version. I did, however, tried out the system by conceding a penalty and changing sides to take the kick. And sadly, the system is still similar. Pressing down directional button and shoot, with accuracy and power determined by the duration you hold on to the buttons, without any form with visual gauge. Well at least you can still apply your existing PES penalty skill.

Link Feints – A new feature of PES 2011. You can have 4 Link feints. For each link feint, you pre-assign up to 4 dribbling feints, locked to 1 side of the right analog stick, e.g Right Stick UP. In the game, by pressing L1/ LT + Pushing Right Stick UP, your player will unleash all of the assigned tricks in sequence. You do not have to manually execute each of the tricks. Just watch your player perform.

Now the thing is, once you start, you can’t stop, until the sequence is over, or when your player loses possession, or dribbles out of play. Thus, you have to choose your sequence carefully and use them appropriately at the right time, or else you might end up running straight into your opponent, or dribbling the ball out of play!