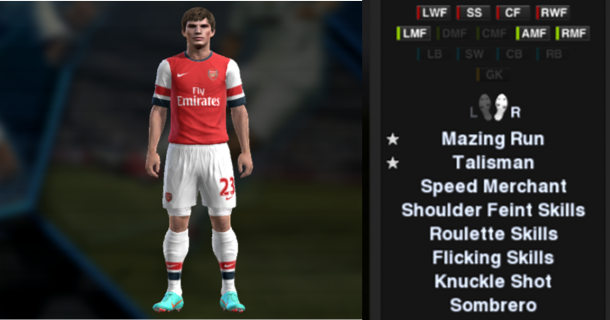 Player Index Cards has been present in PES for a small number of years. Players with these cards possess unique physical and mental skills to give the team an advantage during the game. There are 18 P cards and 26 S cards. This posts will highlight a few which I personally found useful.

Definition: A striker who lurks in the opposition 18 yard box just waiting for the ball.

Pros: These players are great finishers in the box. Pass the ball to them in the box, take a shot on goal, and chances of scoring is high. Even with their backs on goal, they are able to turn quickly upon receiving the ball and take an accurate shot on target. In addition, they are also a real aerial threat.

Cons: Don’t expect them to do too much defensive work.

Ideal Position: Play these strikers near the edge of the penalty box. They have high Kicking Power to score from outside the box. Playing them at the edge of the box also allows them to make late runs into the box to evade their markers and meet crosses.

Definition: The indefatigable all-action player covering every blade of grass for the full 90 minutes.

Pros: Think Park Ji Sung. Typically midfielders, you can be confident that these players will be there to support your attack, and when you lose possession, they will track back all the way to defend. In general, they are everywhere. I once used Juventus and their midfield is packed with these players (Marchisio, Vidal, Asamoah, Pepe, Isla), allowing me to control the midfield and to attack and defend as a team. These players have high stamina and you can use them to sprint all day too.

Cons: They are generally hardworking players, and most of them do not possess the ability to play a defence splitting pass. Having one or two of such players in your midfield is thus sufficient.

Ideal Position: Defensive Midfield or Centre Midfield. Your Attacking Midfield slot should be saved for a more creative player.

Definition: A deep sitting defensive midfielder protecting the backline/ A tough combative player whose sole purpose is to keep the opposition attack in check.

Pros: These are two different player index cards, but to me they perform the same function, to win the midfield battle in the ugly manner. They are usually strong, and possess ball winning ability. Place these players in your midfield and your defence will be thanking you after every match.

Cons: They are generally not good passers thus use them to win the ball and pass it to creative players.

Ideal Position: Defensive Midfield and Deep lying Centre Midfield. Partnering them with a Box to Box player will strike fear in opposition midfielders.

Pros: Most players can execute the knuckle shot. This card just helps to improve the accuracy of the shot. Use these players to take long range free-kicks to improve your chances of scoring from knuckle shot free kicks.

Cons: Probably not much.

Ideal Position: Midfielder and at the wings, where players can attempt long range shot on goal. These players should take long range free kicks as well.

This posts is not suggesting that only these player index cards are useful. In fact, every card has their unique strengths and a winning team requires players possessing an array of index cards. The index cards mentioned in this post are recommended as I have experienced their benefits myself and thus would simply like to share my findings. Please let me know your preferred Player Index Card too by leaving a comment! Thanks!