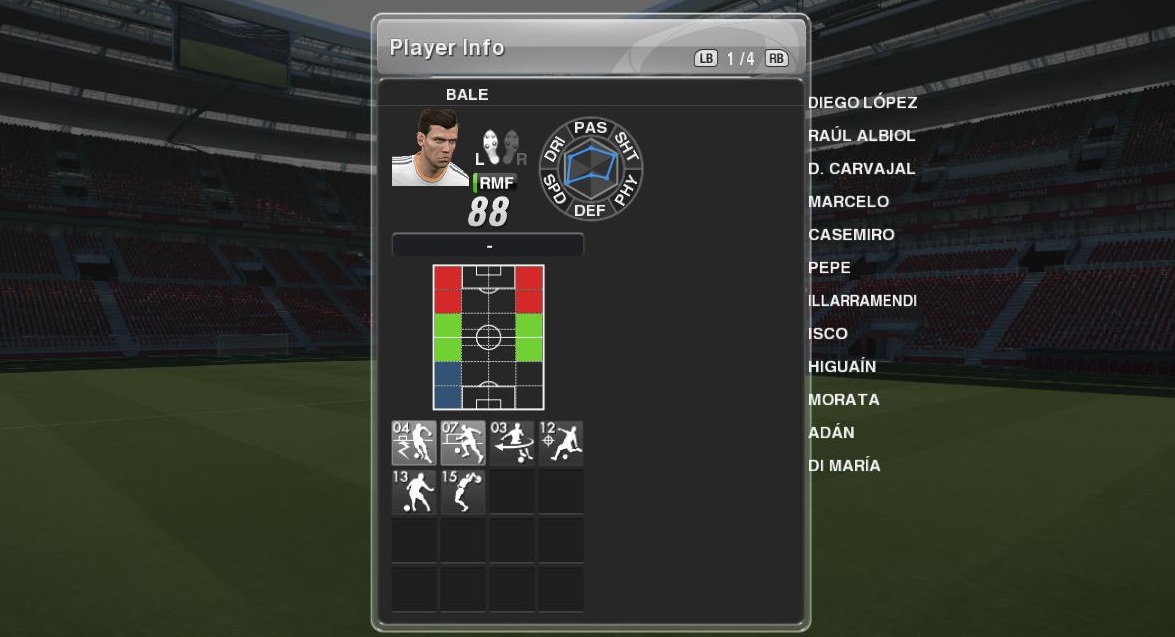 Also known as PES Player Index Cards, Player Skills card show you the type of dribbling and technical skills each player can perform. Knowledge on Player Skills, together with Playing Styles, will give you a better idea if the player is a good addition to your team.

There are 2 types of Player Skills card. The first series of cards are applicable when the players controlled by the AI. You will only see the effect of these cards when these players are your AI controlled opponents, or AI controlled teammates. E.g An AI controlled player with the ‘Trickster’ skill card is more likely to attempt dribbling tricks. The second series of cards enables the player to execute certain skills when you are directly controlling them. 20 player skill cards allow you to pull of dribbling tricks and technical skills with the players in possession of these cards.

05 Precise Touch – Enables players to use a wider range of skills including the “Cut Behind”.

08 Acrobatic Finish – Enables players to find a finish even from awkward positions or when off balance.

13 Outside Curler – Enables players to shoot and pass using the outside of the boot even at long distances.

16 GK Long Throws – Improves the range on throws by the goalkeeper.

17 Man Marking – Makes the player stay tight on the opponent when marking.

18 Track Back – An offensive player who actively pressurises the opposition player who is on the ball and tries to win it back.

19 Captaincy – The strength of character to get more out of the team, pulling players by the scruff of their necks.

20 Super-Sub – Improves player’s abilities when introduced late in the game.

COM Playing Styles cards will not be applicable, unless you are playing Coach mode.

Other player skill cards will prove handy in the game. In previous versions, most of the dribbling tricks are just flashy and not effective. However, I find that PES 2014 has placed more emphasis in these dribbling tricks, and they are actually necessary and helpful in getting you out of tight situations. Players with these dribbling skills card will be assets to your team. Shooting cards e.g Long Range Drive, Knuckle Shot and Passing cards e.g Weighted Pass, Pinpoint Crossing are some of my favourites, as they allow you to execute accurate shots and passes easily. In general, the presence of these cards help us make better decisions on what to do with our players when they are in possession of the ball.

Do you have any favourite player skill cards? Feel free to drop me a comment below. Thanks and enjoy your PES 2014!