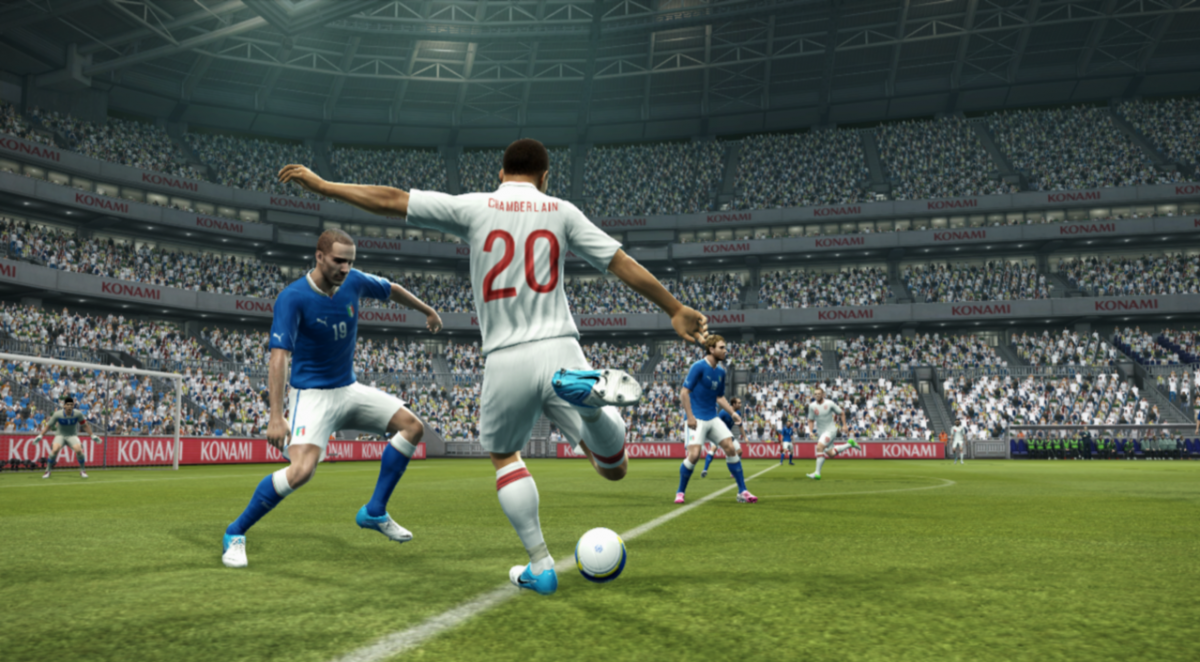 PES 2013 has introduced a number of new features to make the game more interesting and realistic. I will be covering them in this tutorial.

PES 2013 introduced a new dribbling trick called the ‘Double Touch’, where the player will tap the ball to his other leg and push the ball forward, thereby evading the defender directly in front of him. To execute this, Push Right Analog Stick Down/Up, and Push Left Analog Stick Forward.

I love this new trick in PES 2013. I remembered that in EA Sports’ Euro 2004, we were able to do the nutmeg. PES 2013’s nutmeg is slightly more realistic as there is a chance of losing the ball if the execution is timed wrongly. With practice we will be able to get it right.

To execute the nutmeg in PES 2013, hold R2/RT when the defender is in front of you, and press R1/RB (keeping R2/RT held), to push the ball between the defender’s legs.

A slight improvement from previous PES version and similar to recent FIFA releases, holding L2/LT brings your player into a ‘Dribbling Stance’ for you to execute flashy tricks to dazzle and get past your opponent.

For a more realistic match, use this feature at the flanks, where players such as Ronaldo and Neymar can showcase their dribbling skills to beat the defender.

PES 2013 follows FIFA 2012 by having a tackle feature, where the defender will commit himself fully in order to win the ball. A wrongly timed tackle will allow the attacker a free path towards goal. To execute this tackle, double tap the X button on the PS3, or A button on the XBox. I find it hard to tackle in PES 2012, thus this new tackling function is definitely welcomed.

Probably in a bid to make the game more realistic, a player’s first touch may desert them during critical moments. The ball may wobble around when the receiver is in a tight situation. To alleviate this problem, hold R2/RT and point the Left Analog Stick towards the direction you desire when receiving the ball. This will help the player in trapping the ball properly.

In previous versions of PES, we use the L2/LT button whenever we want to make a manual through pass. In PES 2013, this is improved slightly, with the addition of an arrow on the field when the L2/LT button is pressed, allowing you to better track the direction of your passes. In PES 2012, the AI tend to misinterpret our intended targeted when there are more than one teammates in an area. This new feature can probably help to reduce such frustrations.

One-two passing is also improved in PES 2013. Now you can decide on the direction of the run the player make after passing the ball. In previous versions, the player will only make forward runs after passing the ball. In this version, you can decide on the exact direction of the run. To do so, initiate the one-two pass by holding L1/LB and press Pass. Once that is done, push the Right Analog Stick in the direction you desire. This feature helps you to create unpredictable/messy attacking moves to confuse your opponents.

5.1 Choosing the Exact Direction to Shoot

Now you can control the power of the goalkeeper’s throw, similar to FIFA. Penalty taking seemed a little smoother now, and easier to score as well. Diving is still present, though I still find it hard to dive “effectively” (Any advice in this area will be appreciated!) Knuckleshots are still in the game, and you can access the PES command list for the instructions which are unchanged. Set pieces are generally the same, you can either play as the set piece taker, or make runs with your teammates using the right analog stick to receive the ball. Tactics and formation are relatively the same as PES 2012. Lastly, certain players will make improvisations depending on the location of the ball, as the picture below shows.

PES 2013 looks interesting. The gameplay is generally the same, but with the additional of the new features mentioned above, we players will have slightly more control over our game.  The accuracy of passing, shooting and tackling can now be determined by us players, instead of receiving assistance from the AI. This will hopefully increase the difficulty a little and makes the game more unpredictable, which increases its replay value.

Before we end this post, take a look at PESMastery’s First PES 2013 video, showcasing examples of the new features mentioned above. Hope this helps, and enjoy your PES!