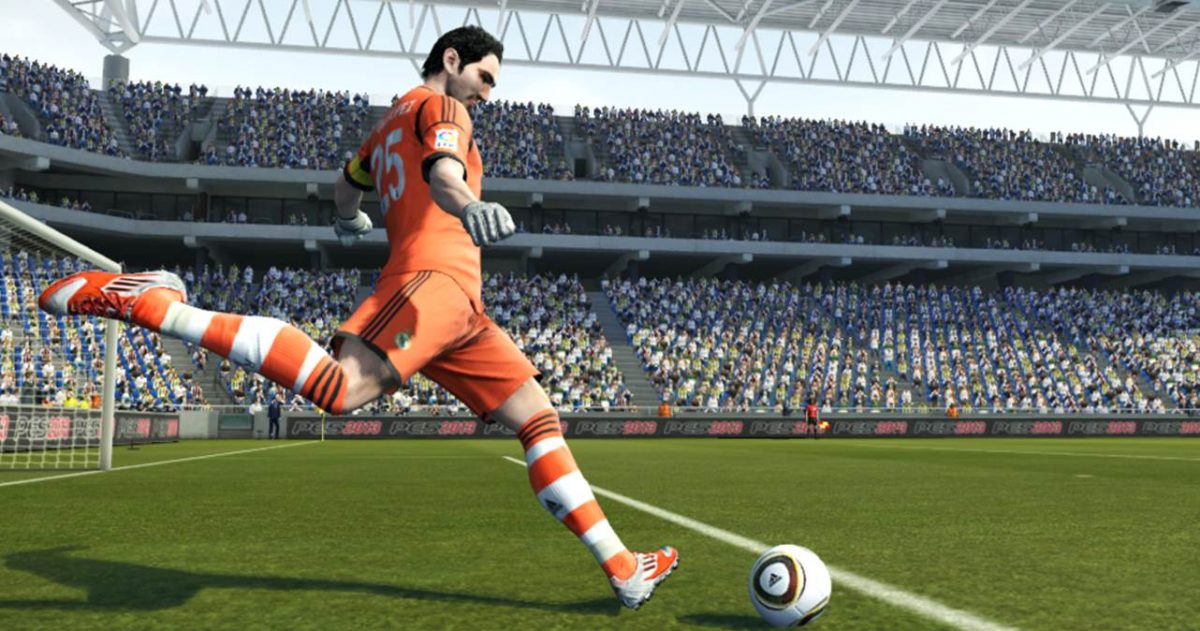 Retaining possession is crucial to winning the match in PES. We have to try and keep the ball all the time. However, when taking goal kicks, the seemingly aimless long punt forward may lead us to lose possession of the ball. In the worse case scenario, this will make us susceptible to a swift counter attack.

In this PES Goal Kick tutorial, we will find out how we can take accurate goal kick, both to ensure that the possession is retained, as well as to start an attack quickly.

There are three ways to take a goal kick.

The first is to play a short pass to the nearest defender. During a goal kick, there will always be a defender standing near the box to receive the short pass. No matter how we adjust the camera angle, the short pass will go to the same defender.

This method is good in the sense that we almost certainly ensure that possession is retained. Unless there is an opponent lurking around, the defender will receive the ball without pressure and can gradually bring the ball up to start an attack. The flipside is that this method slows the game down. More time is needed to bring the ball up the field. Using the short pass option too often makes our play very predictable, and encourage our opponents to push more players forward to pressure the defenders. Thus, it is not the best way to take a goal kick.

The second method is of course taking a long goal kick down the field. An aimless long goal kick will be inaccurate, our midfielders may lose the aerial battle and we will lose possession of the ball. To rectify this, we should play a long punt to an unmarked teammate with the aid of the radar. Before taking the goal kick, take a look at the radar to spot a teammate which is some distance away from the nearest opponent. Side midfielders and wingers are usually unmarked, which makes them the perfect recipient of a long goal kick. Aim towards these players and take the long punt. If the player is very unmarked, he will have sufficient time to trap the ball before the nearest opponents gets to him. We can then either play a forward pass or run towards goal. A safer alternative will be to head to back to the sideback, or to the center midfielder. This method allow us to bring the ball up the field quickly, and maintain possession of the ball.

In the radar shown in Picture 2, the red box shows an unmarked teammate at the flank for the goal keeper to play the long goal kick towards.

Another method of taking an accurate long goal kick involves the use of the off the ball control. During a goal kick, push the Right Analog Stick and gradually change the cursor to an attack. Control him and reposition him into an unmarked position and press the cross button for the goal keeper to play a long punt to him.

In Picture 3, off the ball controls is used to control a teammate and move him to a free position, as indicated by the red box.

Playing short goal kicks to defenders is useful, and now with the ability to play accurate long punts forward, we can vary our approach in restarting play and launching an attack.

Watch the video blow for these techniques in action.