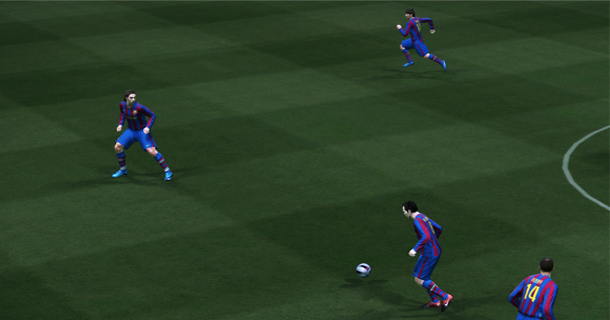 One of the site’s reader, Mike, recently posted a comment.

mike: do you have a formation for barcelona?im a huge fan of the team and my friend plays 4231 with torres as lone striker is dat a good formation for pool?

This is a great question as I have much to say in response to this. Thanks Mike!

Barcelona is a fantastic team, not just in the game, but in real life as well. In PES 2010, the formation and line-up is good on its own already.

In the match, make use of Henry on the left to dribble, cut in around the penalty box for a shot on goal.

Just like in real life, Henry can score from his right foot from the tightest of angle in the game.

Do the same for Messi on the right flank as well, as Messi is able to execute the “Rabona Shot”.

Dani Alves is a danger when going forward. Try a few long shots and early cross into the box.

4-2-3-1 is a decent tactic for Liverpool, making use of Gerrard and Torres up front, with Mascherano in midfield. This makes the midfield a little crowded.

I would man mark Torres with a defender, and Gerrard with Yaya Toure, or any player whose position is close to Gerrard.

Take note of the side backs, and focus your attack on the flank with the weaker sideback.

Unleash your Henry and Messi on the sidebacks, switching flanks, dribbling, pumping long balls, everything!

Since Barcelona wingers are their strongest attacking players, use them to your advantage.

When the going gets tough, use Xavi and Iniesta to pass through ball in the middle, or lofted through ball for your Center Forward, who I guess is Ibrahimovic.

Their passing skills are excellent, thus their passes are hard to defend against, and Ibrahimovic is a skillful striker.

Puyol is a fast defender, but he may lose out on high balls, so ensure he has a tall defensive partner.

That would be what I have to share for the query. Thank you.