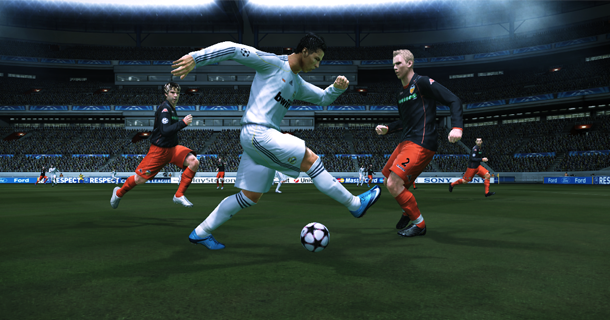 Dribbling in PES brings us a rush of adrenaline. Nothing beats going on a mazy run and scoring a solo goal. Let us first explore the types of dribblers in the game. There are hundreds of them, but they can be classified into two main groups.

These players posses high speed and agility. They are fast, small in size, with plenty of tricks up their sleeves. Use these players to make quick turns to avoid defenders, and sprint pass them.

However, due to their small build, they tend to be outmuscled by strong defenders very easily. We have got to use speed and trickery to get past these strong defenders. Strong defenders are usually slow in pace and reaction. Play our tricksters on the wings and use them to cut into the box. You can deliver their path high balls into for them to chase after, since they have so much speed to burn. Avoid placing them in a central role as this is the area where high balls are contested, and they will usually lose out.

These are players who have high stats in Attack and Body Balance. These are the strong attackers who have no problem challenging strong defenders. You can use them to shield the ball while waiting for support. They are able to bulldoze their way through defenders due to their superior strength. Check out your opponent’s line up, and pair them up with a weak and short defender.

However, these players are usually low in agility, and they may not be able to outrun defenders over a distance. We should only use them to dribble when they are near the box, for them to barge their way in to take a powerful shot on goal.

And of course, some players will fall into both categories, such as KaKa and Cristiano Ronaldo. They are fast, tricky, at the same time tall and strong.

PES has an ever improving list of tricks. Most of them are just flashy. My favourate is the Marseille Roulette and The Scoop, as they are not only flashy, but effective as well. Before you do any tricks, just ensure that your players have the necessary skill cards such as ‘Quick Scissors Dribble’ etc. You can check out my post of Marseille Roulette and Scooping to find out how easily you can implement them successfully.

Besides trickery, press Special Control when dribbling allows you to side step your way past opponents with ease. This is very useful in tight situations, when you just dribble 90 degrees past your marker into open space, before sprinting past him.

Another of my favourate is using the fake shot method. Fake shot commits your marker into blocking your shot, losing his balance , allowing you to sprint past him quickly.

Identify your dribbling type, try out these simple tricks and let me know your results!