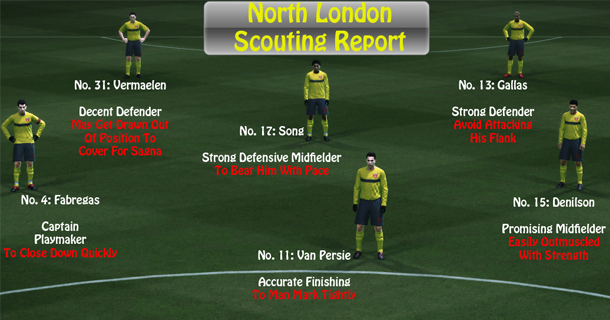 Often, we just wish to go straight into a PES match and ignore all the time consuming tactical adjustment. Perhaps you want a quick match, or your opponent is rushing you to get started. Probably you are already very familiar with your team and see no need to make any changes. But if you only can/ or want to, spare 20 seconds before a match, the most effective knowledge that can aid your game will be Your Opponent’s Game plan. You will gain an advantage even before the ball is played!

And we can achieve that advantage easily with this PES Scouting Guide.

Knowing your PES Opponent’s formation is necessary, but lets take a step further and do some scouting on each of their players. Other than being able to mark their star players, we will also find out where are their weaker links and attack them! We can easily limit their strengths and capitalize on their weaknesses to bring you a step closer to victory.

Now, lets mark one or two of the better player. Usually, I will mark one of the forward, and one midfielder. Set marking setting to tight.

Ensure that your marker’s position is directly opposite the player he is marking. Your LCB should be marking their RCF. Marking the wrong player will result in your marker being pulled out of position. In addition, you may have to alter you marking settings when your opponent makes a substitution, again, to avoid your marker from being dragged out of position and leaving gaps at the back.

After identifying the star players, it is time to zoom in on their weaknesses. Scan through the ratings to find the weakest link, and adjust your play accordingly to attack the weak link. We don’t have to mark them, we are just using this option to identify them.

Now, if their central defence is short, we play high balls into the box constantly. Keep putting in crosses from the flanks, early crosses, or simply long passes from defence. Field a strong Centre Forward to win them in strength. The defence will panic and make mistakes which you will capitalize on.

To counter a strong but slow defence, play ground through balls. Play a fast striker to outpace them.

If you find that their Left Back is constantly attacking, push your Right Winger higher and play counter attacks through him!

When they play with 5 midfielders, play long ball to evade the crowd.

Do a simple scouting before every match, and you will be able to create many ways of play to expose the weakness in any PES team.