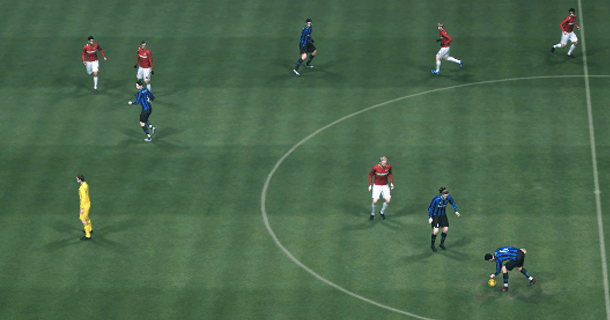 Quickly taken free kicks are very useful in maintaining your momentum and continuing your attack, but it may not be effective in some circumstances.

Henry once scored a quick direct free kick with Arsenal, while the defence is still arranging the wall! In PES, we do not have the option to choose between quick and normal free kicks for every foul. It is only during some occasions where the player will move towards the ball to take the free kick quickly.

Quick free kicks allow us to continue with our attacks before the defence reorganise. This is especially useful in counter attacks where we outnumber the defenders. This option will punish cheats who attempt to hack down players during counter attacks.

I find quick free kicks are only useful when you are in the final third of the field. Before taking the kick, ensure that you have free players who are ahead of you. You won’t want to pass to an opponent to launch a counter attack against you.

If you can take a quick free kick near the center of the field, my advice will be, don’t bother. You won’t gain much of an advantage with such a large distance to goal. In addition, the centre is usually packed with players, so it is pretty hard to find an unmarked teammate. You can pass back to your defenders but I seldom do that as it kind of go against the flow of your attacking play. So I will just wait for the normal free kick where I have more options.

You press the appropriate button when prompted for a quick free-kick.  There is a cut screen, and the player will pass the ball in the direction you press.  If no buttons are held, the player dumbly pass it forward.

Ensure that you hold the intended directional button, or you will lose the ball. I find that quick free kicks does not give me much of an advantage, and I seldom utilize it. In most cases, my options are limited. Most of my teammates are closely marked, and when they received the ball, I am unable to continue my swift attack to goal.

At times, I simply has to pass the ball backwards to my defence, which makes the player looks stupid, and his pass backwards is often weak. On some occasions, the player just pass the ball into space, or worse, to an opponent. My opponent launch a quick counter attack, while my players look on blankly after taking the kick.

How about a Normal Free Kick

Why not wait a moment for a normal free kick. There, you have the option for a long pass forward if you have no clear open team-mates in sight.  When you want to make a short pass, it will be much more accurate, as compared to the short pass during a quick free kick. Ensure there are team-mates around you before you take the quick free kick, because once you realise you are going to give possession away, there is no undo button.