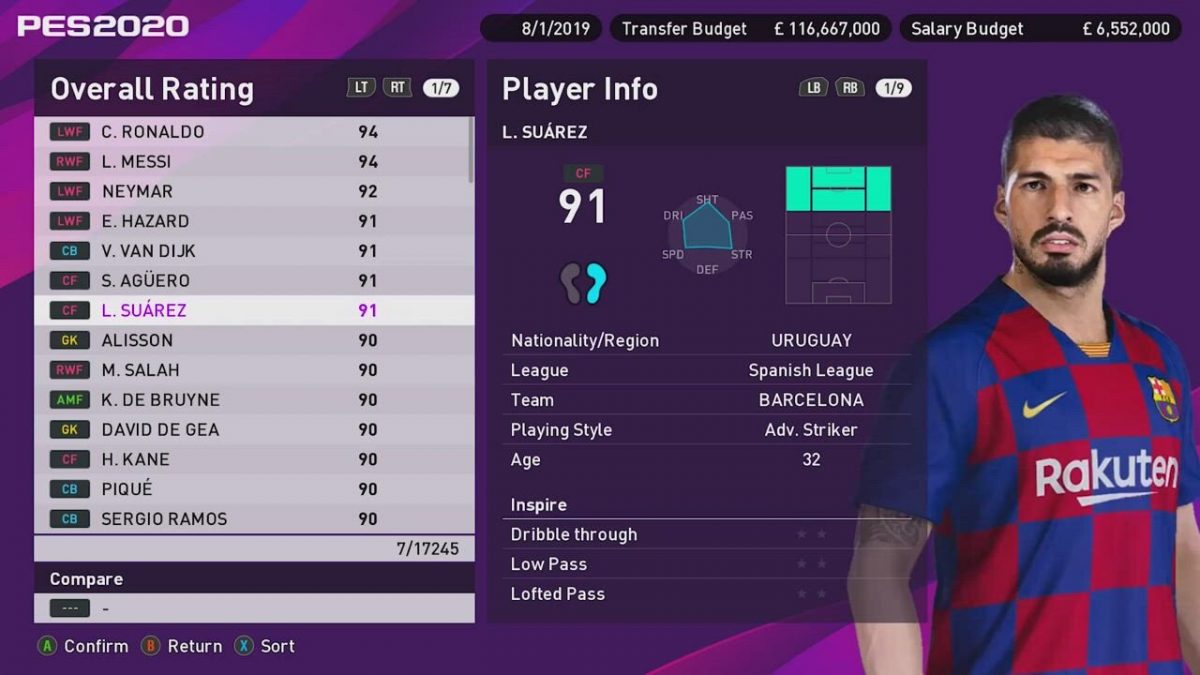 Is your 91 rated player better than his 87 rated teammate? Player ratings in PES can sometimes feel arbitrary and be confusing to new and seasoned players. I hope that this post can shed some light into the player rating system.

How are Ratings Derived

Player ratings are derived from a combination of his various traits. Some are more important than the rest, depending on his positions.

For example, attacking players will have their overall ratings be heavily depending on attacking abilities, such as passing, dribbling, and shooting. Defending abilities will not affect his ratings much.

For goal keepers, it is even more straightforward. His goalkeeping abilities strongly influences his overall rating. So what if he can dribble or pass well? It won’t affect his overall rating much. But in the game, he will have a better touch and can help you retain possession better

While most players will use ratings as a guide to select the first 11, it isn’t everything.

You will have to look at specific individual abilities to decide on the best man for the role.

For example, if you like to charge down the flanks and play crosses in, find a winger with high ratings in acceleration, speed, and passing.

If you like to finess dribble past your opponents, play someone with high ratings in Tight Posession, Balance, and Ball Control.

Fielding a target man? Go for a player with high ratings in Heading, Jump, and Physical contact.

These players will help you play a better game as compared to fielding players with the highest ratings that may not match your style of play.

Focusing on specific traits is also especially fun if you are using a lesser-known team to try and produce an upset. Most of your players will have a low rating, but their specialised skills enable you to play a game that suits your style.

Head to Edit Mode, select your favourite player, and adjust a few of his abilities. First, try adjusting those that are crucial to his position e.g attacking abilities for attackers. Next, adjust those that are not so important.

In PES, player ratings can go above 100, which is quite interesting and will be surprising to most players who assumed a 99 max.

Your players will increase in rating when you are playing Master League and myClub. In Master League, look at their development graph, and focus on training up players with strong potential. Older players will see their ratings drop slightly every year as well, similar to real life. Consider if you wish to sell / release them to save player slots and budget for younger players, to keep them for nostalgia sake.

Player ratings are dynamic. Putting a player in a different position will lead him to having a different rating. Sometimes, his best position (in terms of rating) isn’t even the position that made him famous in real life.

When using a new team and players in Master League, myClub, and Kickoff, using overall ratings to choose your players is the easiest way to get started.

To get more out of your game, use overall ratings as the first step, and dig deeper into the abilities of each of your player to find their strengths and weaknesses.

Be sure to consider your team’s teamwork ratings, as well as choice of captain, to give yourself a higher chance of winning.