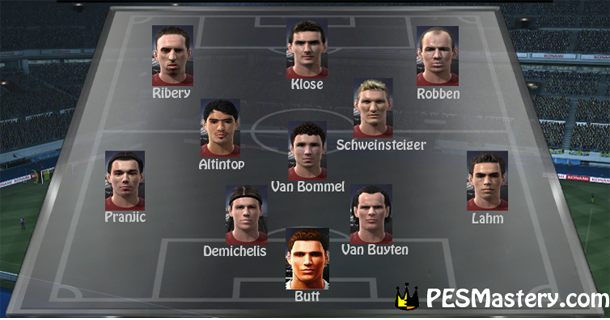 Even though Bayern Munich emerged runner up, their appearance in the Champions League Final may have reignite an interest in the team. One slight problem is, Bayern Munich is not included in PES.

Now, a quick solution will be to simply download a PES patch, and there are plenty out there for you to choose from. Alternatively, you can easily create the team yourself! The team is not present, but most of the players are! Just choose one of the extra teams e.g Team A, remove their players, and register Bayern’s players in.

And here is another edition of PES Team Scouting, sharing Bayern’s Strengths and weaknesses.

Lahm will play as an attacking right back. Van Bommel and Altintop will play more defensively, using their strength to tackle opponents and redistribute the ball. Both players are great passer of the ball with a ‘Passer’ Skill card. So make full use of them. Use Schweinsteiger to dribble and make attacking runs from midfield. Try long shots with him too.

In CF, you can choose from Klose, Olic and Mario Gomez. Gomez has poor stats in PES, though he has a ‘Goal Poacher’ skill card, so perhaps use him as a sub. Klose is a strong target man. Get the high ball to him and he will head it in. Olic is a faster player, who may not be so suitable playing as a CF. Thus Klose is my first choice, and when you need to switch things around, change to Olic and edit his position to an SS for him to play better.

And the 2 wingers are of course Ribery on the left and Robben on the right. Both are fast and dribbles well so you can use them to charge down the flanks, or cut in around the penalty area. This is where the fun begins. Ribery, with a preferred right foot, will cut in from the left and can shoot for the far corner. Similarly for Robben, a left footer cutting in from the right. I enjoy such play in PES as cutting in and shooting for the far corner is an effective and beautiful way to score. The keeper’s view is usually obstructed by other players and your shot will be powerful and homing for the far corner.

To put more pressure on your opponents, activate the PES strategy ‘ CB Overlap’ and use Van Buyten to make late runs forward and try long shots as he has a shot power of 87!

Bayern’s attack is focused on the flanks. Ribery and Robben provide a huge threat to the opponents, supported by Lahm on the right flank, and Schweinsteiger in the middle. Klose in a danger man in the penalty box as he is strong, shots well, and heads even better. And players can focus on attacking as they can rely on defenders such as Van Buyten, Demichelis, and Van Bommel. At 196cm, 184cm, 187cm respectively, these players are tall and strong enough to hold their ground against any attacks in PES.

Pranjic is not a great LB in PES. His stats of 64 will not make you confident of his abilities. His greatest asset will be his pace so just use him to chase down opponents on your left flank. And Klose may not be fast enough to outrun most defenders over a distance. Van Buyten and Demichelis may lose out in pace.

If you are using Bayern Munich in PES, focus on using your wingers. With Ribery and Robben, you can outrun and dribble past most defenders. You can cut in and shoot for the far post, or cross in for the powerful Klose to attack the ball. At times, use Lahm to overlap and put in early crosses from the right flank. Use Schweinsteiger to make runs down the middle and try long shots. Avoid giving the ball to Klose, unless it is a cross into the box. If necessary, only use him to dribble just outside the box as he can use his strength to force his way through and takes a powerful shot.

If you face Bayern Munich, probably with a friend, man mark their CF tightly, and their 2 wingers loosely. Focus your attack on Pranjic, or whoever their LB is, as that is the weaker flank. Play fast counter attacks to take advantage of the gaps left by Lahm on the right flank.  High balls may not work against Bayern Munich’s tall defenders. Try to use pace and outrun them instead.

And that concludes my PES Bayern Munich’s Team Scouting. I hope you find this useful. Leave a comment and let me know what you think.