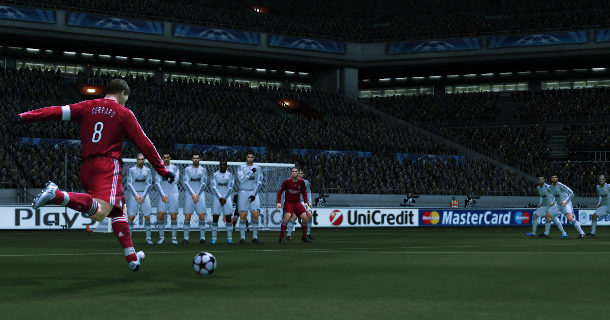 Scoring from free kicks in a PES match is absolutely satisfying. Although practise is the best way to find out the best way to score with a certain player, we definitely do not have the luxury of time, nor the patience to do that. I would like to provide you with some guidelines to shorten your time in the PES training arena.

Less than 30 metres to goal, straight at goal.

a. To execute a shot over the wall and away from the keeper,
choose a free-kick taker with high free kick accuracy and swerve.

DOWN + X is for top spin, allowing the ball to clear the wall and spin back down.

b. For a powerful shot straight past the keeper.
Aim towards the corner the keeper is at, away from the wall.
Free-kick taker with high power and shot accuracy.

(SHOOT, then UP + Triangle) Power just below half.

c. A powerful ground shot could be used if you anticipate the wall would be jumping.

Aim at the wall, away from the keeper.

Less than 30 metres, left side of goal.

Use a right footer when free-kick at left side, and vice-versa.
Free-kick taker strong in Free-kick accuracy, swerve.

(SHOOT, then LEFT + X) Power slightly more than half.

Aim over wall, away from keeper. Free-kick taker with high free-kick accuracy, power and shot accuracy.

(SHOOT, then DOWN + x) Power slightly more than half.

a. Using the 2nd man to take the kick would surprise the goalkeeper (L1 + free-kick technique). The keeper will stand rooted to the ground.

Ensure 2nd man standing on right side of the ball if he is a left footer and vice versa.

b. When your team has a player with a powerful shot, use the 2 man indirectly free-kick to set up a shot (L1 + PASS for the layoff pass, followed by SHOOT).

If crossing is preferred to shooting, use any footer player regardless of side and distance.

When free-kick is close to 40metres,

Inswinging or Outswinging, power around 5/8.

Pressing UP while charging power would lead to a faster ball.

When free-kick is close to 40metres.

Inswinging or Outswinging, power around 5/8.

Pressing UP while charging power would lead to a faster ball.

When free kick is along the goal line, attempt to look for unmarked players to head the ball in.

Use a variety of these techniques to pose a threat during every free kick.