Hello,
Recently I have been playing around with Villareal in PES 2009.
I came up with this formation that looks rather cool and would like to share it with you : ) 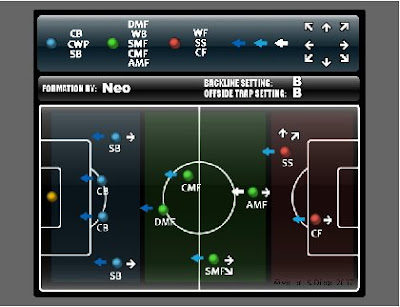 It is a 4-3-1-2. The back 4 with DM on Dark Blue defense, SM and Strikers with Light Blue defence. While AMF with white defence.

This formation do not have a clear LM, allowing LB, AMF and SS to cover the left flank, making it confusing for the opponent. In addition, AMF and SS can also attack through the center.

I place PIRES as the AMF since I regard him as the most talented midfielder in the PES 2009 Villareal team. As he is old, I give him the luxury of Low Defence. For SS, I would put Nihat, as he has the best stats in the team. Capdevila covers the LB, Edmilson DM, Sienna CM.
The rest of the position, to me, can be filled by those who are on form (Red Arrow)


Hope this formation is of help to you, or it inspire you to come up with a more interesting one!
And if you want to showcase your PES 2009 formation, here is the link for you to drag the items around. Print screen, crop and save it!
http://img225.imageshack.us/my.php?image=tool3zu1.swf