I would just like to share with you my tactics for Arsenal in PES 2009. I spend most of my time using this team since it is my favourate club.
This is my preference as I had gotten used to 4-4-2.
Whichever tactic you use in PES 2009, just ensure that you know where your players would be at to ensure smooth passing : ) 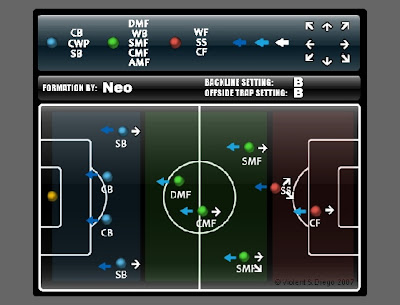 I find that the Arsenal team in PES 2009 has relatively few star players as compared to other top clubs.
And they play rather badly in the beginning.

Here is how I would line them up initially.

I would recommend this line up when you control Arsenal initially as these are the better few players.
Denilson is still kind-of lightweight and pretty much useless.
However give him 2 years plus and he would grow to be a great player.
In the meantime you could buy or loan a strong defensive midfielder to beef up your midfield.
Eboue could be used as a right back or right mid. Usually I play him as an alternate Right Back.
Do allow Bendtner and Vela, as well as Fabianski to play as they would improve their stats in 2 years time.
Fabregas and Walcott would grow to be impressive as well.

After your first year, you could try switching to this line-up.

Note the arrows of Walcott. I made him run down the wing as he has tremendous speed.
As for Van Persie, he has the ability to cut in and deliver a good shot.
Although Vela‘s stats is not impressive yet, he has great speed. I put him as CF on the right, allow him to cut in and shoot with his left foot. This position works wonders for me!

And if you register Ashravin into the team, you can put him in SS position as well, alternating with Adebayor. Ashravin is great with both feet as he is able to pass and shoot well.

Arsenal in PES 2009 has an amazing set of strikers, including young strikers with great potential, so perhaps you would like to focus on bringing in quality defensive midfielder, and center backs to replace Gallas.

Gallas and Toure are great at headers so control them to defend the near post during opponents’ corner kick.

I hope this helps all those using Arsenal in PES 2009 !

Does anyone else has additional tips for Arsenal?